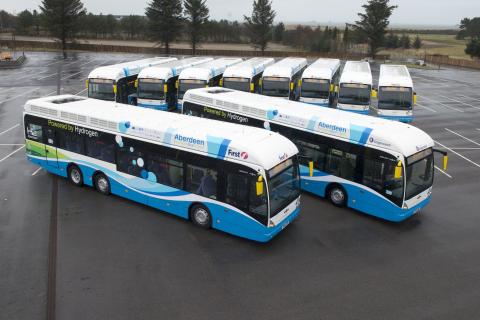 Aberdeen City Council has been given the green light to increase its fleet of hydrogen-powered buses by another 10 to 25.

Under the JIVE project, funded by the Fuel Cell and Hydrogen Joint Undertaking (FCH JU), Aberdeen City Council has acquired and is in the process of deploying 15 hydrogen buses in Aberdeen, Scotland, in partnership with First Group, as part of a wider acquisition of 145 hydrogen buses across Europe.

An additional £1 million of funding is now available through the JIVE project, and the Council's Strategic Commission Committee on Thursday approved plans to increase the number of hydrogen buses to 25.

The Council heads said the additional buses would increase demand for hydrogen in the region and allow a commercial supplier to enter the market as part of a ‘hydrogen hub’ delivery.

The delivery of the Aberdeen Hydrogen Centre is part of the city's Strategic Energy Transition and Infrastructure Plan efforts to become a climate-positive city, promote an energy transition and assist in the green economic recovery following the Copenhagen Conference.

Councillor Philip Bell, Aberdeen City Council’s environmental spokesperson, said: ‘Aberdeen has led from the front in promoting clean energy by having the most successful hydrogen bus fleet in Europe and seizing the opportunity to expand this further through the JIVE project is testament to this council’s commitment to be a climate-positive city.’

‘The future of road transport will be electric but where that electricity is derived is the question.’

‘Hydrogen fuel cells offer high power for heavy-duty vehicles, cars with exceptional range and refuelling times on a par with petrol or diesel.’

‘This investment is the next phase in Aberdeen’s hydrogen journey and will ensure that Aberdeen stays at the forefront of hydrogen technology to emphasis its credentials to become the world energy transition capital.’