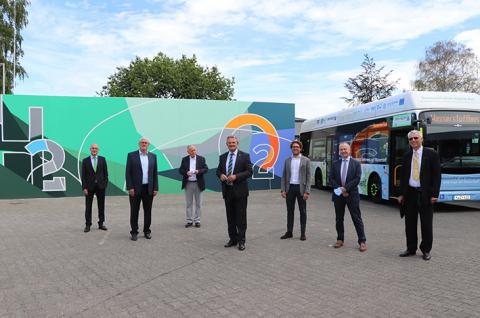 The German transport company Regionalverkehr Köln GmbH (RVK), representatives of the European Commission, the Federal Ministry of Transport and digital Infrastructure (known in German as BMVI) and the Rhein-Sieg-Kreis (RSK) district, officially introduced this exciting project at Meckenheim.

A bus fleet of 35 fuel cell hybrid buses and two hydrogen refuelling stations were presented to the public today. The launch at the Meckenheim site was a great milestone for the entire project. The industrial partners involved at the site were also present.

The RVK has been running on hydrogen since 2011. Thanks to the support of RVK’s shareholders, the then still visionary project was developed in several stages deploying first two prototypes, then two pre-series buses from 2014 to the current state: the largest fleet of fuel cell buses in Europe!

Bert Spilles, the Mayor of Meckenheim, together with Eugen Puderbach, the Managing Director of RVK, welcomed the numerous guests and expressed his thanks to the shareholders, sponsors, and partners. ‘I would like to thank my teammates as pioneers who recognised the value of this alternative fuel for effective climate action early on and dared to help shape the project together’, he said. 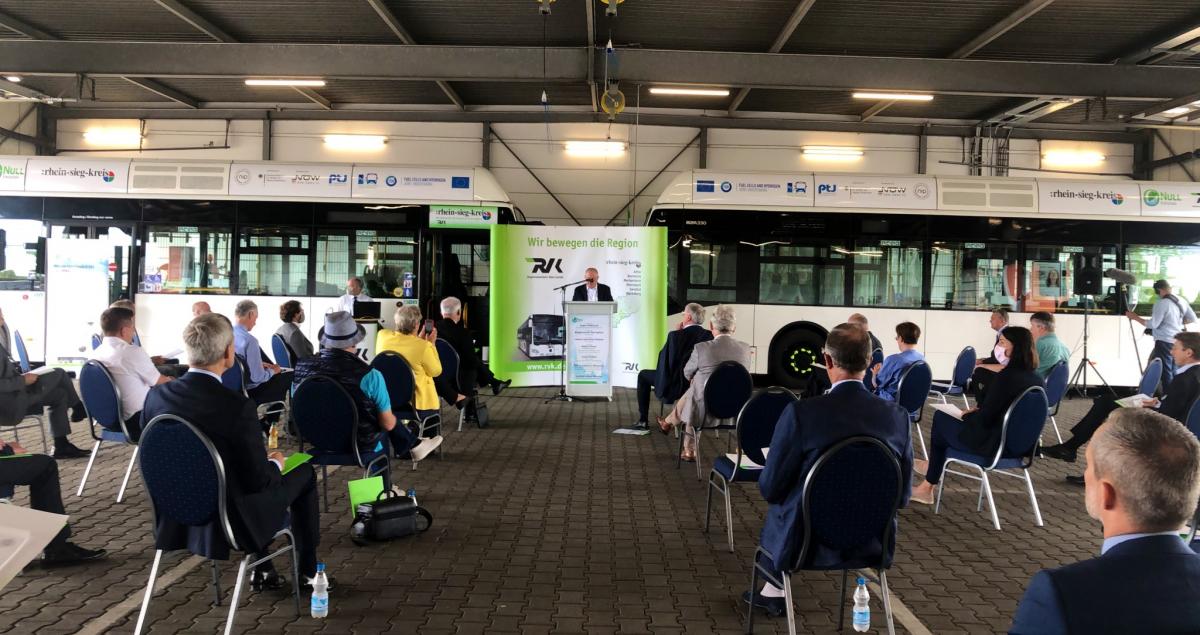 After the necessary training of driving personnel and final commissioning of the refuelling station, the first ten fuel cell hybrid buses will soon be in regular service in Meckenheim. The new refuelling station is ready for this purpose. In its current expansion stage, it will enable the daily refuelling of 20 fuel cell buses in two cycles of 10 vehicles each.

The remaining 25 buses are used at the RVK locations Wermelskirchen and Bergisch Gladbach in the Rheinisch-Bergisch district and the city of Hürth.

‘The use of fuel cell buses represents a further, significant step towards improving the quality of public transport,’ said Sebastian Schuster, the District Administrator of the Rhein-Sieg district. ‘We are proud to be part of a pioneering role that is attracting attention throughout Europe and would like to encourage other regions to get on the road as well and thus make a substantial contribution to climate action’, he added.

Implementation thanks to a funding scheme

RVK is receiving grants for the purchase of the fuel cell hybrid buses from the FCH JU (Fuel Cell & Hydrogen Joint Undertaking) as part of the EU-funded project JIVE, as well as co-funding from the BMVI under the NIP-2 programme. The infrastructure development that has taken place is also supported by funds from the NIP-2 programme and by INEA (Wermelskirchen only) as part of the EU project MEHRLIN.

Federal Minister Andreas Scheuer stated, ‘Today, Europe’s largest fuel cell hybrid fleet with 35 buses and two hydrogen refuelling stations goes into operation in Meckenheim. This will bring hydrogen technology to people in everyday life. This is exactly what it is all about: bringing modern and climate-friendly technologies onto the road and inspiring people. To this end, we are investing around 14 million euros in the project until 2021’.

The EU is paying further subsidies amounting to around 7 million euros to RVK for the procurement of the 35 fuel cell hybrid buses and the hydrogen tank system in Wermelskirchen, which will be delivered in 2020.

Robert Missen, Head of the Innovation and Research Unit of the Directorate-General for Mobility and Transport (DG MOVE), is convinced of the ground-breaking nature of the project. ‘The replacement of diesel buses with a new fleet of fuel cell buses is a wonderful example of the decarbonisation of transport and the attractiveness of public transport. What is particularly impressive is that this is not happening in a capital city, but a suburban region. In Brussels, we will closely monitor the success of this initiative, and I am sure that it will be an example of best practice in the EU for clean intercity bus transport’, he stated. 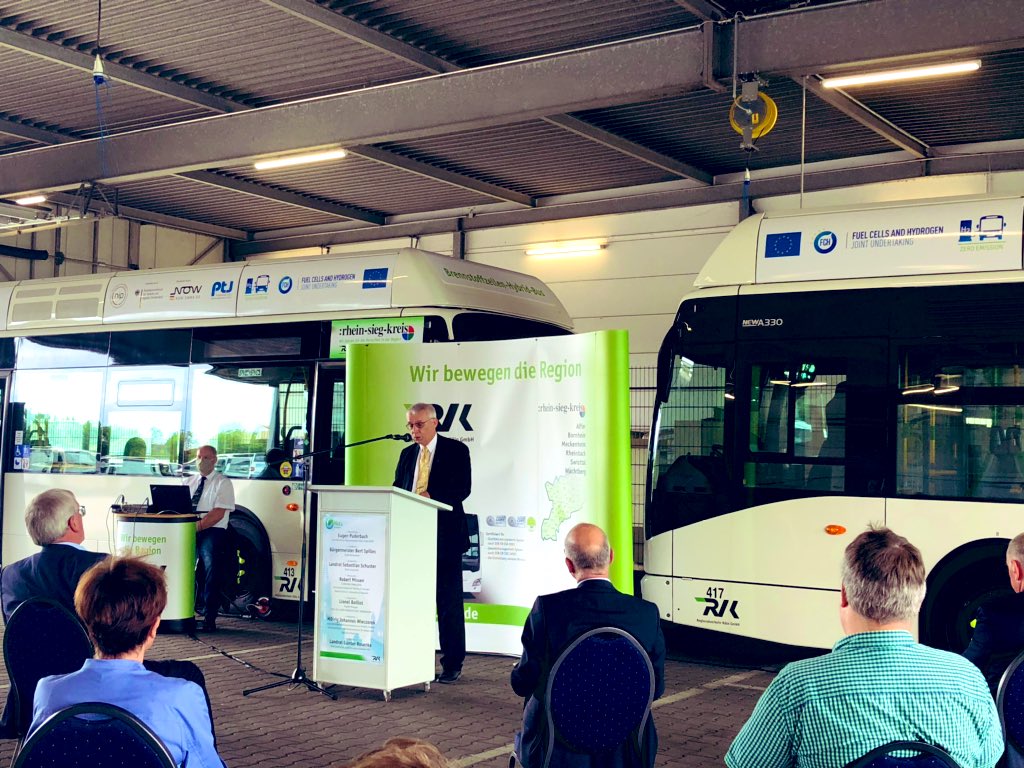 Lionel Boillot, Project Manager at FCH JU (Fuel Cell and Hydrogen Joint Undertaking), added ‘that RVK has introduced a clean European technology for bus transport without cutbacks, from which the citizens of the region will benefit in the long term’.

By the end of 2021, RVK will integrate a further 15 fuel cell hybrid buses into its bus fleet in the Rhein-Sieg district, the Rheinisch-Bergisch district and in Hürth as part of the subsidised projects. These buses will also be purchased as part of the EU project JIVE 2 and funded by the FCH JU, the BMVI via the NIP2 programme and Ministry of Transport of North Rhine-Westphalia. In total, RVK will then have 50 fuel cell hybrid buses.

Hydrogen and the following steps on climate action

The topic of hydrogen has reached the industry and society since the announcement of the National and European Hydrogen Strategies. And rightly so, as hydrogen is an excellent carrier of transportable and storable energy.

As an alternative fuel, it means almost no local emissions in terms of exhaust gas and very reduced operating noise, as the buses are equipped with an electric motor. In addition, hydrogen in local public transport guarantees the required ranges, short refuelling times, high availability, and versatility of the vehicles.

Decision-makers at all levels, welcome the current climate-friendly measures or projects, which give a meaningful boost to the recovery, especially in times of COVID.

This is also emphasised by District Administrator Günter Rosenke, who as Chairman of the Supervisory Board has supported RVK’s path to the corporate goal of zero-emissions from the very beginning: ‘RVK has already achieved a lot, but it is not resting on its successes. Numerous environment-oriented goals are still on the agenda.’ He gave an outlook on upcoming RVK projects such as the ‘Grüner Mobilhof GL’ in Bergisch Gladbach in the Rheinisch-Bergisch district and the ‘Training and Further Education Centre for Climate-Neutral and Digital Mobility’ planned in the town of Mechernich in the district of Euskirchen.

Parts of the refuelling station serve as unloading points for the hydrogen trailers. The 4 x 13.6-metre-long walls installed there could be painted in a competition with the Alanus University for Art and Society in Alfter, which is in the Rhein-Sieg district. Three students from the Faculty of Fine Arts/Painting - Anna Dippel, Carlos Herrera, and Helena Schenk - had won the competition. They dealt intensively with the project and with the electrochemical process of the fuel cell in the buses: ‘The fact that scientific progress is used to protect the environment is a wonderful development and, therefore, also the subject of our design.’

More details in the factsheet (in German).