Netherlands: 20 fuel cell buses and hydrogen refuelling station for provinces of Groningen and Drenthe by December 2020 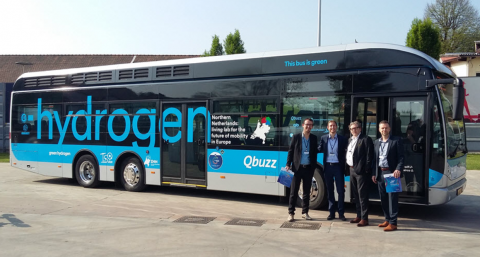 Next step in use of green hydrogen for transport

OV-bureau Groningen Drenthe awards the tender for green hydrogen to Shell Nederland. Shell will build a Hydrogen Refuelling Station (HRS) at the Peizerweg bus depot in Groningen. At the same time Qbuzz orders 20 fuel cell buses with the Belgium based bus company Van Hool. The project is supported at European level by the Fuel Cells and Hydrogen Joint Undertaking as part of the JIVE2 project.

Shell will provide between 110-160 tons of green hydrogen per year and Van Hool will provide 20 fuel cell buses. This 20-bus project means hydrogen is becoming a significant part of the energy transition strategy for public transport in the north of the Netherlands. The buses and HRS are planned to be in operation by December 2020.

Fleur Gräper - van Koolwijk, regional minister for the Province of Groningen and chairwoman of the Public Transport Authority OV-bureau said: ‘This is a big step for us. Hydrogen is no longer an experimental fuel, but has become a serious zero-emission drivetrain used in every day public transportation. We are proud to implement hydrogen at this scale in the north of the Netherlands and to be a frontrunner in the Netherlands and Europe. It emphasizes the new energy-future we see for the North of the Netherlands.’

Two fuel cell buses, also built by Van Hool, have been running in regular operation since December 2017 already. In this pilot project hydrogen comes as a by-product from the chlorine factory of Nouryon in Delfzijl.

The new buses will be lighter and more economical. Despite the rapid development of hydrogen as a fuel, running costs are still higher. The two buses in Delfzijl and the 20 buses in Groningen are supported by the province of Groningen, the ministry of infrastructure and water management and the EU within the Fuel Cell Hydrogen Joint Undertaking (FCHJU) as part of the High-V.LO City and the JIVE2 projects.