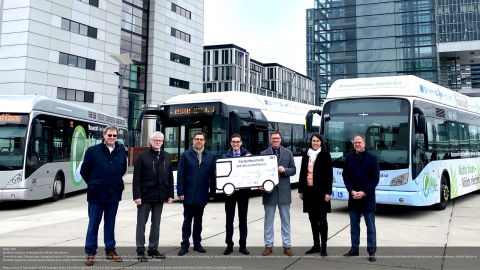 The German public transport operator Regionalverkehr Köln GmbH (RVK) and its shareholders have reached a new milestone thanks to funding from the Federal Ministry of Digital Affairs and Transport. One hundred and eight hydrogen-powered buses will be added to the fleet by 2025. With 160 hydrogen-powered buses, the fleet, already the largest in Europe, will be further expanded.

A very comprehensive package, with 79 individual hydrogen-powered buses purchased in the first procurement phase and 29 hydrogen-powered articulated buses in the second phase. The procurement of articulated buses is still largely dependent on market availability. RVK is expected to be able to test the first vehicles in the fourth quarter of 2022. On the other hand, according to the current situation, the first 20 individual buses of the financing package will possibly be delivered to RVK as early as December 2022.

The financing of these zero-emission vehicles is part of a series of grants awarded by the Federal Ministry for Digital Affairs and Transport. Eight public transport operators received 600 million euros within the framework of the new directive on the promotion of alternative drive systems for buses in passenger transport.

RVK, with its administrative headquarters in Cologne, provides its services in the surrounding areas of Cologne and Bonn. With its public transport authorities and shareholders, it is one of the hydrogen pioneers. The urban bus cities of Hürth and Brühl joined in 2011, and since 2020 the Rheinisch-Bergischer Kreis and the Rhein-Sieg-Kreis on the left bank of the Rhine, and from now on also Wesseling. Since then, emission-free vehicles have also been used on the lines entering Cologne and Bonn.

Thanks to the support of the RVK shareholders, the project, which was visionary in the early days, has been developed in several stages through the deployment of two prototypes in 2011, two pre-series vehicles in 2014, the addition of 35 Van Hool series vehicles in 2020 and 15 Solaris Urbino 12 hydrogen fuel cell buses in 2022 until today: The largest hydrogen-powered bus fleet in Europe!