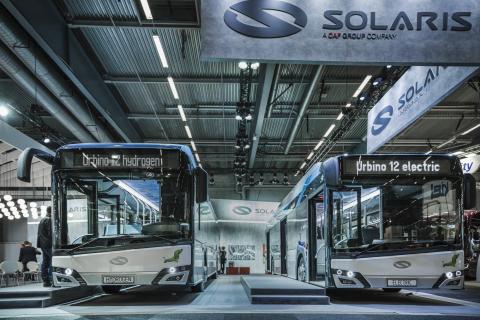 There is a lot going on in the hydrogen world! Solaris presented the Solaris Urbino 12 fuel cell bus, at the UITP summit in Stockholm yesterday (10/06/2019).

About the new bus model

The new generation Solaris Urbino 12 hydrogen bus represents the continuation and development of a concept which saw the light of day in 2014 , when two articulated electric buses (Solaris Urbino 18,75m) powered with fuel cells as range extenders, were delivered to Hamburg as used as part of the innovation line 109.

Thanks to the 60 kW fuel cells which are used to power the buses, the Solaris Urbino 12 hydrogen bus will be capable of covering up to 350 km on one tank. Furthermore, this twelve-metre bus, which will be able to carry up to 80 travellers, is extremely silent, offering in this way additional comfort to the driver, passengers and to the surroundings.

This complements the other zero emission solutions offered by the manufacturer, battery and fuel cell solutions to be seen as complementary options, depending on users needs. As stated by Solaris: “Is E-mobility the future of public transport? For Solaris Bus & Coach it is the present.”

We are happy that the first city to order 12 Solaris Urbino fuel cell buses is Bolzano, in Italy, partner of the European project JIVE, co-funded by the Fuel Cell and Hydrogen Joint Undertaking (FCH-JU).

Hydrogen is not a new story for Bolzano, the city being a pioneer in the technology: the transport operator SASA already has 5 fuel cell buses in service deployed since 2013, as part of the CHIC project. South Tyrol has the ambitious aim of taking a leading role and positioning itself as a model region for sustainable alpine mobility by 2030.

It is therefore not a surprise that SASA Bolzano is the first customer to order the new generation of fuel cell bus of Solaris. The contract includes an 8 year-long service and maintenance package. Part of the contract is also a special drivers’ and workshop personnel’s training emphasizing the safety aspects of using and servicing hydrogen vehicles.

During the UITP Global Public Transport Summit, representatives of Solaris and Régie Autonome des Transports Parisiens (RATP- public transport operator in the Région Ile-de-France) also signed a contract to lease Solaris Urbino fuel cell bus. RATP will test the Solaris fuel cell bus for 10  weeks (April-June 2020). This is another step made by RATP in the preparations to replace its fleet with alternative fuel technologies, after the announcement to procure up to 800 battery electric buses by 2024, on time for the Olympic Games in the French capital.