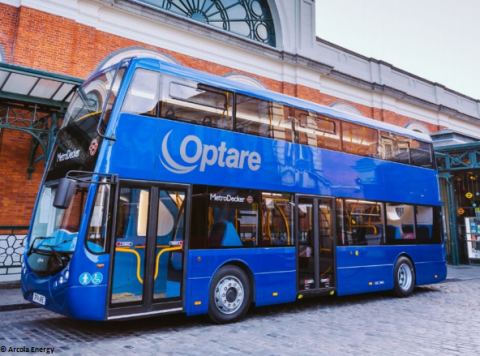 From the delivery of 3,000 hydrogen fuel cell buses to the launch of a new UK-made hydrogen-powered bus, this week has been packed with good news for the UK hydrogen industry.

Wrightbus revealed plants to decarbonise the UK bus fleet with the introduction of up to 3,000 zero-emission fuel cell buses over the next four years. The bus manufacturer has submitted documents to the UK government detailing how it could expand the manufacture of its hydrogen buses aiming to convert up to 10 per cent of the UK fleet to zero-emission models. The buses will be built at Ballymena, Northern Ireland.

Jo Bamford, Wrightbus’ new owner, stressed the importance of zero-emission transport in making a big difference to air quality after the COVID-19 pandemic. He stated, ‘cities around the world see massive reductions in air pollution as many vehicles have been kept off the road during the pandemic. However, the reality is that if we just go back to how public transport has traditionally been run, levels of pollution will quickly rise again to the same levels as before the crisis.’

According to Bamford, 300 million pounds should be used to support the purchase of the buses through an incentive scheme so that they could be sold at the same price as diesel ones. Furthermore, the working force numbers at the manufacturer can be increased by 700 per cent.

Hydrogen buses have already been introduced or are planned in many UK cities. Some of these cities, such as Aberdeen, Birmingham and London, are co-funded by the Fuel Cells and Hydrogen Joint Venture (FCH JU) under the Horizon 2020 programme through the JIVE project.

Arcola Energy and the Optare Group have announced the launch of a fuel cell double-decker bus manufactured in the UK for the domestic and international market.

The Metrodecker H2 base vehicles will be mass-produced at the Optare factory in Sherburn-in-Elmet, which means that the bus will be built entirely in the UK.

The bus can carry more than 90 passengers with a range of 200-250 miles depending on specifications and route. Both companies believe this new bus will make a significant contribution to urban air quality and a low-carbon economic recovery following the COVID-19 pandemic.

Dr Ben Todd, CEO of Arcola Energy, said, ‘Our partnership with Optare is an important step forward, not just for Arcola Energy, but for hydrogen fuel cell vehicle deployment in the UK. The innovative structural design of Optare buses makes them ideally suited to housing zero-emission powertrains; and most importantly, to producing buses which we believe will be the safest, most efficient and easiest to maintain in their class.’

Graham Belgum, CEO of Optare Group, commented, ‘We believe fuel cell technology has the potential to complement Optare’s award-winning battery electric vehicle range. We can see applications for fuel cells on inter-urban routes in temperate climates and in high ambient environments where air conditioning is essential, and the energy consumption is high.’