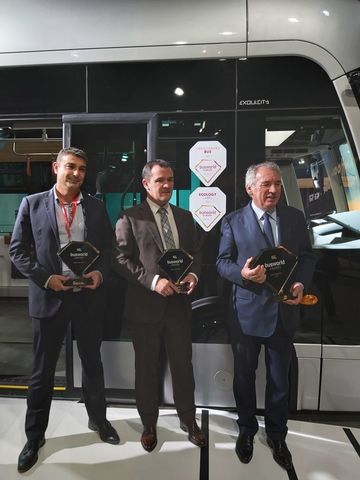 Van Hool's fuel cell bus Exqui.City18 has just been awarded at Busworld: Not only the fuel cell bus has been awarded with the most prestigious award of Busworld, the "Grand Award Bus", alias Bus of the Year, it has also obtained  the sustainability award, the "Ecology Label".

The fuel cell bus was in competition with 11 other buses tested and validated by a jury of professionals.

The French city of Pau placed an order with Van Hool for 8 Exqui.City18 FCs: hydrogen-powered single-articulated tram-buses, as part of  the co-funded project 3Emotion ans JIVE2, supported by the FCH-JU. The fuel cell buses will be used in a Bus rapid Transit System, a world premiere.

About the technology: A fuel cell converts hydrogen and oxygen into electrical energy through reverse electrolysis. On the one hand the electricity is used to power the vehicle and, on the other, unused energy is stored in lithium batteries for additional power where and when needed. When pulling away from a stop. The only emission from this zero-emission vehicle is vapor water. The Exqui.City18 FC Pau design, has a capacity of 125 passengers. The vehicle can be fully refuelled in 10 minutes, and can travel approximately 300 km. The local project's name is FEBUS.

The Mayor of Pau, François Bayrou, present during the award ceremony, commented: "This is amazing! The innovation, the design and the technological performance of Febus are acknowldged by all. It was the only 100% hydrogen tram-bus of the exhibition. This award is envied by manufacturers worldwide. All these Chinese, Californian, Scandinavian, Australian experts talk about Pau! This is a worldwide recognition for a city like ours and the challenges we have to face".

While the official press release is not out as we write this article, please find additional information here: the brochure of the bus developed for Busworld, an article from La République des Pyrénées outlining the award (in French), information about the different awards and 2019 nominees.